Watsonville, CA, September 9, 2018 – The S. Martinelli & Company, known across the country and around the world for producing the highest quality sparkling cider and apple juice that is fresh-pressed from 100% U.S. grown apples, has launched a new product, 1868 Hard Cider. This unique alcohol based hard cider commemorates the company’s rich 150-year history.
“We are very excited about the launch of our 1868 Hard Cider. It’s a great way for us to celebrate Martinelli’s rich heritage, as most people don’t realize that we were founded as a hard cider company in 1868,” explained Gun Ruder, President of S. Martinelli & Company.
Martinelli’s made its first hard cider in 1868, but was forced to stop production when the 18th Amendment was adopted in 1920. In 1933, when Prohibition was repealed through the 21st Amendment, Martinelli’s brought back their original recipe. In the 1970s, as sales of Martinelli’s popular, non-alcoholic Gold Medal Sparkling Cider and Apple Juice grew, the president of the company at the time, Stephen C. Martinelli, made the tough choice to put the historical recipe to rest again. Martinelli’s Hard Cider officially stopped being produced in 1978.
Today, the 1868 Hard Cider is produced in partnership with Gordon Biersch at their state-of-the-art bottling facility in San Jose, California. Unlike many other hard ciders that are made from concentrate with added water and preservatives, Martinelli’s 1868 Hard Cider is made from fresh-pressed U.S. grown apples that are fermented with no additives of any kind. The result is a crisp and flavorful hard cider that lives up to Martinelli’s high standards for fresh taste, quality and purity.

Martinelli’s 1868 Hard Cider is currently available in Costco stores in Northern California and will be in Costco stores along the entire West Coast by October 31st. This premium product is available in 12-ounce bottles, packed in 12-pack cartons, with packaging that features a vintage hand drawn illustration by third generation President, Stephen C. Martinelli. The packaging mirrors Martinelli’s original hard cider line produced in the 1950s.
About S. Martinelli & Company
S. Martinelli & Company has been family-owned and operated since 1868, producing Gold Medal premium quality products in Watsonville, California. This year, they are celebrating their 150th anniversary as a company led by its fourth generation CEO, John Martinelli.
For more information visit www.martinellis.com. 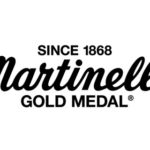 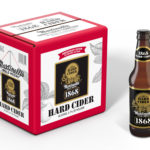